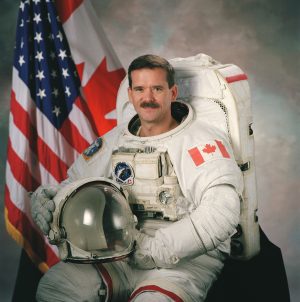 KEY FACTS: Hadfield is Canadian. He was raised on a farm and became interested in flying from a young age when he saw the Apollo 11 mission on television. He learnt to fly during his time in the Canadian Armed Forces and went on to complete his fighter plane training. He also completed a degree in mechanical engineering.

In 1992, Hadfield was selected to be one of four new Canadian astronauts. He spent twenty years working for NASA in various roles including as the voice of mission control and supporting shuttle launches.

Hadfield participated in some space missions during his time working for NASA. In 2012 he travelled to the International Space Station. He made headlines for singing in space including his tribute to David Bowie.

ACHIEVEMENTS: He received the order of Canada in 2014 amongst other awards.