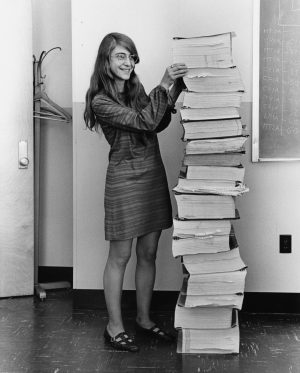 KEY FACTS: Margaret was born in Indiana, US. She studied mathematics at university and went on to take a position at MIT (Massachusetts Institute of Technology) as a software developer, developing software to predict weather.

Hamilton then joined a department working on developing software for the Apollo space mission. This included a guidance system that could handle errors and prioritise tasks. Three minutes before Apollo 11 was due to land on the moon, the computer became flooded with tasks and sent out a warning alarm. Thanks to Hamiltons software, the problem was solved and the spacecraft landed safely on the moon. Without her guidance system, the mission may have been aborted!

ACHIEVEMENTS: Hamilton was one of the first people to use the term ‘software engineering’. She is a leading female figure in her field. In 2016, she received the Presidential Medal of Freedom from Barack Obama, the highest civilian honour in the United States