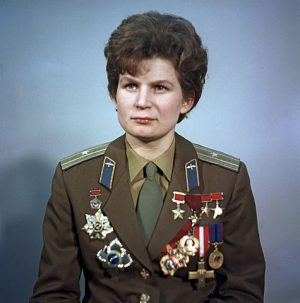 KEY FACTS: Valentina Tereshkova was born in central Russia. she became interested in skydiving from a young age, making her first jump at the age of 22. In 1922, Valentina was selected to join Russia’s ‘Cosmonaut Corps’. At the time, they were looking for a parachutist under the age of 30 – Valentina fitted this description.

After undergoing lots of training, Valentina piloted the Vostok 6 flight, aged just 26. During this flight she orbited the earth 48 times and spent almost three days in space. She went on to train as a cosmonaut engineer. She was also chosen for several political positions.

ACHIEVEMENTS: She is the first woman to have flown into space. She is seen as a hero in post Soviet Russia for her political work.